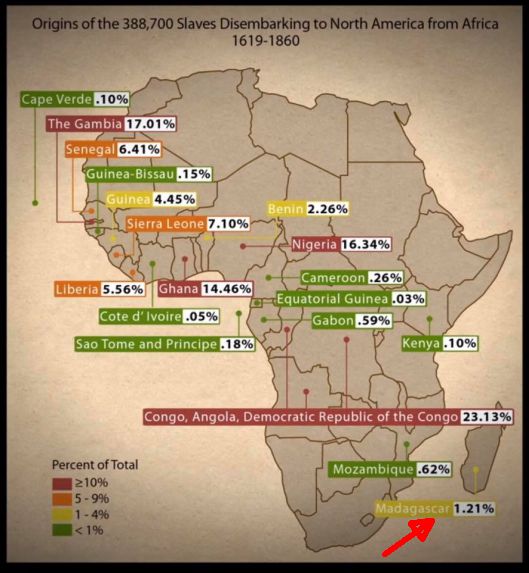 Several years ago, I read a post on the AfriGeneas African-Native American Genealogy Forum board of someone seeking information on the “Matagascan / Malagascan / Matogascan Creek Indians” because family lore claimed that her great-great-grandmother was from this “Indian” tribe. Another poster commented, “My mother’s father always described his mother as being a full blooded Malagaskan Indian woman with long black hair down her back.” I even found a slave narrative of a man who also claimed this heritage. James Brittain of Mississippi relayed the following in his slave narrative about his grandmother:

“My grandma came from Virginia . . . When my grandma died she was one hundred and ten years old. She said she was a Molly Gasca negro. That was the race she belonged to. She sure did look different from any the rest of us. Her hair it was fine as silk and hung down below her waist. The folks said Old Miss was jealous of her and Old Master. I don’t know how that was.” (Source)

I began to associate the name “Malagascan” and “Molly Gasca” with Madagascar, an island located 250 miles off the southeastern African coast of Mozambique in the Indian Ocean. Being one of the largest islands in the world, Madagascar is roughly the size of Texas. The sounds of the names were almost phonetically identical.

Shortly afterwards, another poster in the AfriGeneas African-Native American Genealogy Forum soon wrote, “An elderly cousin told the story of my ggg-grandfather who was from a royal family of Madagascar Africa that was taken as a slave out of Madagascar Africa on a slave ship.” A third poster also recounted oral history of her ancestor being brought to Virginia from Madagascar. A fourth researcher, Monifaa, also communicated the following, “My mom’s oldest brother has alleged to me that my ggg-grandmother was captured by slavers from the island of Madagascar and sold to cotton plantation owners in North Carolina.” Researcher Tracey Hughes discusses the discovery of her Madagascar ancestor in her blog post.

In Exchanging Our Country Mark, Michael Gomez wrote about the connection between “Madagascar Negroes” to Virginia; a small number of them were imported into Virginia during the early years of the transatlantic slave trade (p. 41). Gomez describes how those particular Africans were “yellowish” in complexion and had hair like a “Madagascar’s.”

Madagascar’s inhabitants are called the Malagasy people, and they speak a language by that name. Sources note that many of the Malagasy people possessed light skin and facial features very akin to people in Southeast Asia and Indonesia. Many others possessed darker skin and curly hair. Geneticists have determined that all of the Malagasy people descend from ancestors from Africa and Asia, specifically Borneo (source). I began to realize that, as time passed in America, Africans from Madagascar were characterized as being “Indians,” or “Black Indians.” I also wondered if some of the alleged Native American ancestry that many African Americans claim is actually Malagasy ancestry from Madagascar.

Well, I finally got my answer. A new DNA match, with the surname Ramalanjaona, appeared in my father’s 23andMe database of DNA relatives. He shares 10 cM of identical DNA with my father on chromosome 12, with a predicted relationship of 5th cousins. They share a common ancestor at least six generations back. I didn’t inherit this particular DNA segment, but one of my sisters did. Cousin Ramalanjaona indicates on his profile that he is Malagasy. I messaged him, and he confirmed that his parents are from Madagascar!

23andMe shows an ancestry composition chromosome painting, and Cousin Ramalanjaona shares identical DNA on one of the Southeast Asian segments on my father’s chromosome 12. See figure below. This confirms that Southeast Asian ancestry is a great indicator of Malagasy ancestry and that my father likely had an ancestor from Madagascar. DNA Historian Fonte Felipe asserts, “The very fortunate circumstance about tracing any possible Madagascar ancestry is that it can be confirmed much more easily by way of the unique Southeast Asian component in Malagasy genetics and the inheritance of these markers among their descendants in the Americas.” (source) In July 2018, my father also gained another distant cousin DNA match from Madagascar in Ancestry DNA. Her last name is Ralalanirina.

Approximately 400,000 enslaved Africans were transported to America during the transatlantic slave trade, and only about 4,800 of them were from Madagascar. That is just 1%. They were transported via 17 documented slave voyages into New York and Virginia from Madagascar. Of that total, from 1719 to 1725, around 1,400 enslaved Africans from Madagascar were disembarked into Virginia through the Rappahannock and York River ports. Additionally, more were transported to the Caribbean, especially Jamaica and Barbados. Because my father had a number of enslaved Mississippi ancestors who were born in North Carolina and Virginia, I am theorizing that his enslaved Madagascar ancestor was likely disembarked in Virginia. The Madagascar human imports into Virginia included the following:

In Season 3 of the TV series Finding Your Roots, actor Keenen Ivory Wayans learned that his African ancestor in his direct paternal line, who was brought to America, i.e. his “Kunta Kinte,” very likely came from Madagascar.

One thought on “Got Roots in Madagascar?”