Nonetheless, for Veterans Day this year, on the 100th anniversary of Armistice Day, the end of World War I, I also pay homage to them, who were both World War I veterans. Born near Como, Mississippi, on 13 December 1893 and 22 February 1896, respectively, Uncles John Wesley and Jessie were the first two children born to my great-grandparents, John Hector Davis & Mary Danner Davis. My grandmother, Minnie Davis Reed, was the youngest of their nine children. Great-Grandpa John had four additional children.

Uncle John Wesley died on 11 May 1940, at the young age of 46, leaving his wife, Aunt Henrietta, with seven young children to raise alone, including two sets of twins. My mother recently recalled, “I was just a toddler when Uncle John Wesley died, so I don’t remember him. Momma talked about him often and his service in World War I.” Uncle Jessie Davis was part of the Great Migration, the migration of more than 6 million African Americans from the rural South to the cities of the North, Midwest and West from about 1916 to 1970. He and his family migrated to Evanston, Illinois, where he died in 1968.

When the United States declared war against Germany in April, 1917, the War Department realized that it needed more soldiers. The 126,000 men in the Army were insufficient to ensure victory overseas. Congress then quickly passed the Selective Service Act on 18 May 1917, requiring all male citizens between the ages of 21 and 31 to register for the draft. The government ordered its first draft on 5 June 1917. Three additional registrations were eventually announced during the war.

Uncles John Wesley and Jessie registered during the first draft on 5 June. Below are their draft registration cards from Ancestry.com. Draft registration cards are also searchable on FamilySearch here. The information on the cards includes the following: order and serial numbers, assigned by the Selective Service System, full name, date and place of birth, race, citizenship, occupation, personal description, and signature. For more info, a great read is Tips on Using World War Draft Registrations by genealogist Robyn Smith. 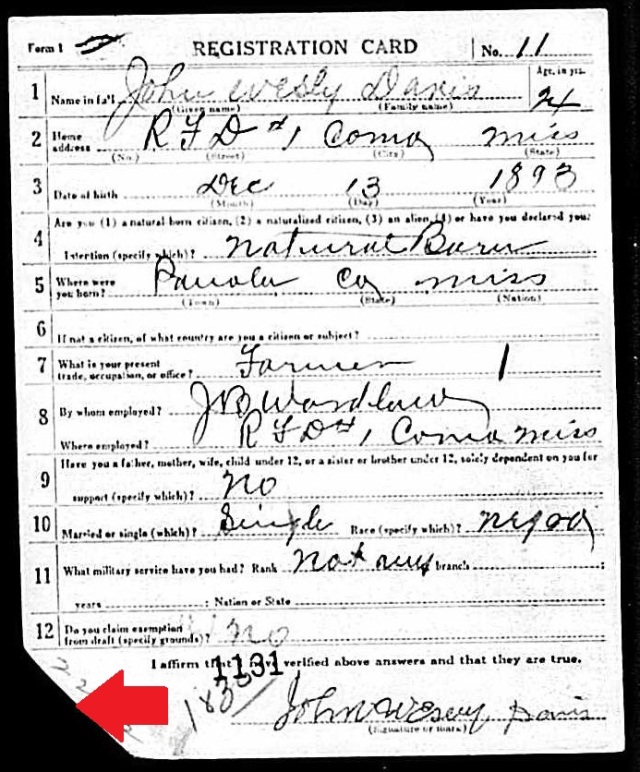 What are the red arrows indicating? The military’s policy of segregation instructed that African Americans to be inducted separately from whites. Therefore, local draft boards required African-American registrants to tear off one corner of their registration cards so they could be more easily identified. See the difference with a white registrant’s card below.

After men registered, local draft boards selected inductees for the military. Over 24 million men were accepted for military service, and over 2 million were African-American, comprising of nearly 10 percent of the total registration. Being a single man with no children who was between 21 to 31 years old, a local white draft board in Batesville, Mississippi selected 22-year-old Uncle Jessie on 7 March 1918. He was then ordered to report to Camp Pike near Little Rock, Arkansas, established 18 July 1917 to serve as training camp for the 87th Division (National Army). The following order report containing Uncle Jessie’s name was found on Ancestry.com. To my surprise, it shows that his first cousin, Travis Howard, the father of Elston Howard, the first African-American baseball player for the New York Yankees, was also ordered to report to Camp Pike.

Five months later, 24-year-old Uncle John Wesley was selected on 23 August 1918. I can only imagine the agony Great-Grandpa John & Great-Grandma Mary Davis felt to now have two sons and a nephew to go to War. Uncle John Wesley was ordered to report to Camp Shelby near Hattiesburg, Mississippi. It was a basic training facility that was established a year prior, in 1917. His death certificate, shown below, reported that he served as a Private First Class with Company C of the 326th Service Battalion. Service battalions were also known as “labor battalions.”

Rampant racism prevailed, and the military continued its discrimination against African Americans by relegating their assignments primarily to labor battalions. White military officials stereotyped African-American men as not having the physical, mental, or moral character necessary to withstand combat. Many whites, especially southerners, were also fearful of having a large number of African-American men trained in the use of firearms. Undoubtedly like the others, Uncles John Wesley & Jessie Davis and Cousin Travis Howard, whose maternal grandfather Edward Danner (1832-1876), my great-great grandfather, had fought in the Civil War with Company I of the 59th Regiment Infantry of the United States Colored Troops, had hoped to demonstrate their abilities and patriotism and to annihilate their second-class citizenship by serving in combat units, fighting the Germans on the front lines.

However, the Army assigned a majority of them to labor battalions, who were responsible for constructing wharves, docks, railroads, and warehouses. They filled trenches, carefully removed unexploded shells from fields, and cleared equipment and barbed wire. They also loaded and unloaded freight, felled trees, repaired roads, and buried soldiers killed in action. White officers worked them up to 16 hours a day. Although very few African-American men got the opportunity to serve in combat units, the services of the labor battalions were vital to the success of the military campaigns, which depended on efficient supply and transportation. (Source)

Returning home from Europe in 1919, Uncles John Wesley and Jessie Davis continued their lives on the farm in Panola County, assisting their father and grandfather, Hector Davis (1842-1925), who owned and farmed over 80 acres. Both of them married in 1921, and started their own families. The 1930 U.S. Federal Census shows them as living adjacent to each other, and they were noted as being veterans of World War I.  Cousin Travis Howard later graduated from Tuskegee Institute in 1935, studying under the great George Washington Carver. He served as principal of O’Bannon High School in New Madrid, Missouri for many years, and also established the town of Howardville, Missouri, located just west of New Madrid. He died 8 October 1988, at the age of 92.

The grisly task of burying the bloated, decomposed, and mutilated bodies of slain soldiers mentally affected many soldiers. Many undoubtedly suffered from what it known today as Post Traumatic Stress Disorder (PSTD). Uncle John Wesley Davis was taken to Veterans Administration Hospital in Memphis, Tennessee, 48 miles away, two days before he died. His cause of death, noted as hyperthyroidism with psychosis, suggests that he had a psychotic breakdown possibly caused by a bad thyroid disorder. But I can’t help to wonder if his service in World War I contributed to his demise.

Interestingly, his death certificate also confirmed his service in World War I and provided his rank and the name of his unit – Company C of the 326th Service Battalion. That was a great find! Hopefully, upcoming research at the National Archives in College Park, Maryland may identify Uncle Jessie Davis and Cousin Travis Howard’s units and more information about their service.